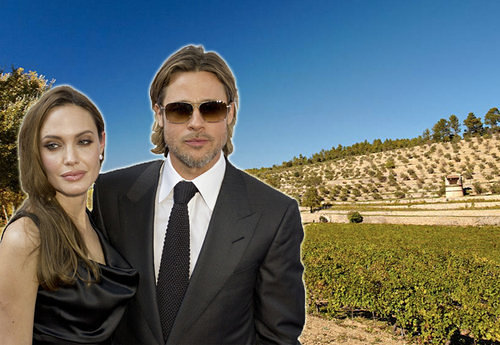 You may not be able to drop by the 1,000-acre estate owned by Brad Pitt and Angelina Jolie in Southern France, but beginning next month, you will be able to drink rosé made from the organic grapes harvested on their sprawling property. Bloomberg reports that the Hollywood power couple has teamed with Famille Perrin, which owns Chateau Beaucastel, to release a rosé named after Pitt and Jolie’s chateau, Miraval. Fascinatingly, the wine was previously released under the name “Pink Floyd,” after the iconic rock band that recorded The Wall in Miraval’s own recording studio(!). In 2011, however, the couple purchased the 35-room chateau, which they had been previously renting, and the valley that the estate encompasses, for an estimated $60 million. After mutual friends introduced them to the Perrins, they decided to continue Miraval’s wine-making tradition.
On Wednesday, Brad Pitt, who has also recently branched out into the furniture business, released a statement through his publicist: “We are intimately involved and quite enthused over the wine project with our friends the Perrin family.” In an interview with Decanter (!), Marc Perrin confirms that the couple has been intimately involved in the wine-making process, attending rosé-blending sessions, deciding to switch to steel tanks, and helping to design a new shape and label for the bottle. (Together, the families will be identified as “Jolie-Pitt and Perrin” on the label.)
“They want to ensure they are making the best Provence wines they can,” Perrin assures potential skeptics. “If you knew Brad and Angelina, you would see they are in search of perfection in everything.” After releasing their first rosé in March, the Perrins and Pitts plan to introduce their first white wine at the end of the summer.